The original article was published on Smartasset.com.

Because the cost of living tends to correlate with population size, mid-sized cities are often more affordable alternatives to large cities and potentially offer better opportunities to save and invest. Your salary can go a lot further when your costs are lower, so people who use a cost-of-living calculator to compare expenses between cities may gravitate away from major metropolises.

In this study, we assess and rank the affordability and livability of mid-sized cities in the U.S. by looking at a variety of economic factors. Like in last year’s study, we identified mid-sized cities in America as those with populations above 100,000, excluding the 100 largest cities in the country. For more information on data sources and how we put together our final rankings, check out the Data and Methodology section below. 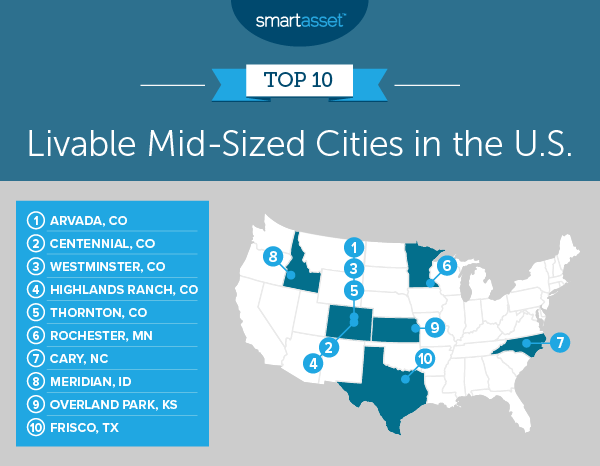 With a population of about 120,000, Arvada is the seventh-largest city in Colorado and comes in first in our study this year of the most livable mid-sized cities in the U.S. Across the eight metrics we considered, Arvada scores relatively well for five-year median home value change and percentage of the population below the poverty line. From 2014 through 2018, home values increased by 62.64%, the seventh-highest rate for this metric across all mid-sized cities, and in 2018, about 4.7% of residents were below the poverty line, which is the eighth-lowest rate for this metric overall. Though rising home values may deter renters or new residents from buying, it is great news for current homeowners who have profited from increased demand in the housing market. Additionally, the low poverty rate indicates a strong job market and livable wages for workers.

Westminster, Colorado performs similarly to Arvada and Centennial across many of the metrics we considered. It ranks very well for five-year median home value change and percentage of the population below the poverty line, and it also has a relatively low unemployment rate. Median home values in Westminster increased by 60.43% from 2014 through 2018, which is good news for current homeowners there. Furthermore, about 5.5% of the population was living below the poverty line, and 2.8% of the labor force was unemployed in 2018.

Highlands Ranch, Colorado, a mid-sized city with 108,257 residents in 2018, is very financially stable: Household incomes are high and inequality across socioeconomic groups is low relative to the other mid-sized cities we looked at. In 2018, the median household income in Highlands Ranch was $124,795, the sixth-highest of all 226 cities in the study.

Located north of downtown Denver, Thornton, Colorado has low poverty and unemployment rates, ranking 27th and 24th for those two metrics, respectively. Additionally, homeowners in Thornton have benefited from the uptick in popularity of cities within the Denver metro area. Current Thornton homeowners might find it encouraging to know that their investment is paying off, as median home values have increased by almost 66% in the five years from 2014 through 2018 – the highest percentage increase of any city in our top 10 and fourth-highest across all 226 cities in the study.

Rochester, Minnesota moved down in our rankings from last year, when it tied for first with Olathe, Kansas. Though both the percentage of residents below the poverty line and unemployment rates in Rochester decreased from 2017 to 2018, the median household income also fell. According to Census estimates, in 2017, the median household income in Rochester was $75,464, but in 2018, it was $70,094.

Following residents in Rochester, Minnesota, workers in Overland Park, Kansas have the second-lowest average commute time of any city in our top 10, an estimated 20.2 minutes. Additionally, poverty and unemployment rates are low, and the 2018 median household income of $83,717 is relatively high, ranking 40th of all 226 cities in our study.

The housing market in Overland Park has remained flatter than in many other mid-sized cities. The change in median home values in Overland Park from 2014 through 2018 – 24.89% – is the lowest of any city in our top 10 and falls in the bottom half of all cities. Though this is not great news for current homeowners, it may entice renters or new residents to buy. Check out our calculator to see what kind of home you can afford in Overland Park.

Frisco, Texas moved up from 16th in our 2018 study. The median household income in Frisco increased substantially between 2017 and 2018. According to 2017 Census estimates, the median household income was $122,302, while in 2018, it was $131,989, the third-highest amount of any mid-sized city. Unfortunately, housing costs in Frisco are also high. In 2018, the median monthly housing cost in Frisco was $2,004, the 13th-highest amount across all cities in the study. 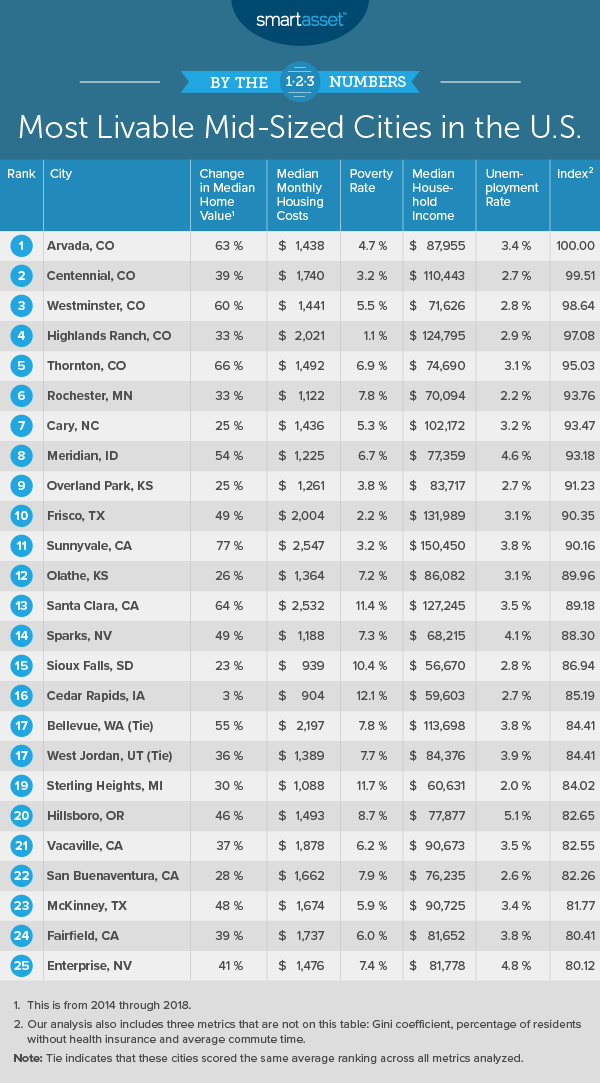 To find the most livable mid-sized cities, SmartAsset analyzed data on cities with populations above 100,000 in 2018, excluding the 100 largest cities in the country. It is important to note that though we employed the same methodology as years past to identify mid-sized cities in the U.S., some cities may have shifted in or out of the study given changing population sizes between years. This year, 226 cities fell under our definition of mid-sized. To rank them according to livability, we compared the cities across the following eight metrics:

Tips for Finding an Affordable Home